You have four pools of energy: Fire, Water, Air, and Earth. If they're all empty at the end of a turn you'll lose.

Your powers will spend different amounts of energy, the circled number in the upper right corner.

The damage a power deals is displayed in the lower left corner.

If you ever start a turn without being able to use any of your powers you lose.

Each point of enemy damage will drain energy from a pool at random.

There are three types of powers:
Attack powers deal damage, they're represented by a sword in the upper left corner.

Defence powers reduce damage taken, they're represented by a shield in the upper left corner.

Support powers regenerate energy, they're represented by a circled plus in the upper left corner.

The enemy will give you a generic tell. It's an indication of what it might do.

You pick an power to use against it.

Defence counters Attack, it will half the damage taken and cancel any extra ability the Attack power might provide. If it belongs to the counter element it will nullify the damage completely. If a Defence power doesn't face an Attack any special abilities it might provide do not trigger.

Resistance halves damage as well(e.g.: Using a Fire Attack on a Fire elemental will cause it to only take half damage). If it also happened to defend it will nullify the entire damage.

Halved values are rounded up.

After you defeat an enemy you will receive energy depending on its level.

You also get your choice of one of three powers. The powers are tied to the element of the defeated enemy(e.g.: A Fire enemy will most likely offer Fire powers and energy, it might offer some Earth and/or Air powers and energy, but it will never generate any Water powers or energy).

You can choose to skip any of three powers and get more energy.

If you ever run out of energy or start a turn without any usable powers you lose. 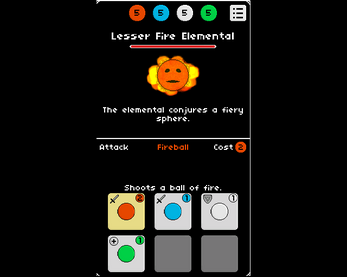